Despite having so many wonderful cities and destinations to visit in this beautiful European country, Greece has always been a place which has managed to slip off my radar when it comes to booking time. But more recently, visiting Greece has become more of a priority for me, especially after researching its stunning offerings over the last few weeks on both the mainland and across its famous islands. Sadly, it may not (definitely won’t) fit into the travel schedule this year, but I really couldn’t resist putting together a Greek bucket list post for a little inspiration for my travels next year and perhaps yours too.

AthensAn obvious choice to begin with, maybe, but Athens is a priority destination for me. A city that’s more than 3,000 years old, Athens is well known for its monuments and archaeological attractions, including the iconic hilltop temple, Acropolis of Athens. As the heart of an ancient civilisation, Athens has so much history and for me, that’s what makes it so appealing. Plus, it had around 4.5 million visitors in 2016, making it one of the most visited cities in Europe, so I’m sure that with these many people heading here, it’s a destination worth making time for. 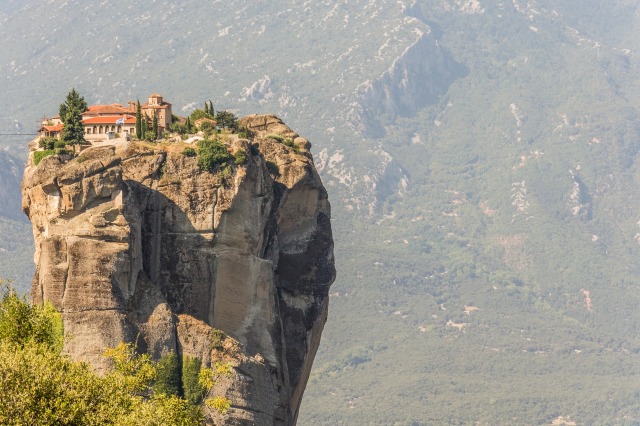 These stunning cliffs rise high into the clouds, 1,200ft to be exact, overlooking the towns Kalambaka and Kastraki in Northern Greece. But aside from their picturesque quality, what makes them even more appealing is the fact that historical monasteries are built on top of these iconic cliffs which date back to the 14th and 16th century, helping Meteora to secure its place on the UNESCO World Heritage List. Let’s be honest, how amazing would it be to see this in real life?

As the second largest city in Greece which happens to be a coastal one, Thessaloniki is home to both the old and the new elements of the country.  Staying true to its heritage, the city is still home to the ruins of Roman Emperor Galerius’ 4th-century palace. But it also offers beautiful sea views, plentiful offerings of souvlaki and Greek wine, making it a magical holiday destination where you can indulge in the culture but take the time out to relax simultaneously.

Probably one of the most iconic and popular sites in Greece for holiday-makers with 1.5million tourists visiting annually and countless Instagram posts on your feeds to drool over, Santorini is an iconic Greek island full of carefully designed, bright white buildings with beautiful blue domes. And of course, it has seaside views which make for delightful panoramic views and romantic sunsets. But July and August are obviously peak times to visit, so if you’re thinking of taking a trip here, it’s recommended that you choose more off-peak months to fully appreciate its beauty.

As a Greek island based in the Cyclades group in the Aegean Sea, Mykonos is famous for its party lifestyle and glamour appeal. Deemed as Greece’s answer to Ibiza by Lonely Planet thanks to its club scene, Mykonos is also said to have another side to it which is more known to be more relaxing and reclusive. The island itself boasts 25 beaches, some of which of course will be for the partygoers but there are also hideaway options for those of us who want to walk on the quieter side. Plus, the South West side of the island is famous for its beachfront eateries to entertain foodies whilst sharing an afternoon tipple with stunning views to keep you satisfied.

I think I’ve not found Greece as appealing in the past as I’m not really a ‘party holiday’ kind of girl – as you’ll see from my previous blog posts, I’m much happier when I’m out exploring. But after doing a little bit of additional research, I’ve seen how much more there really is to this historic, picturesque country. So of course, this has now been added to my list of travel priorities, especially as I’m trying to reach as many European countries as possible before I hit 30. So, where would you like to visit/ or would recommend visiting in Greece?

← Biking around with nextbike
How to spend a day in Cádiz →