Over the last couple of weeks, in the lead up to the release of the live action Beauty and the Beast, my attention has been fully on the Instagram account of Primark. I know most people won’t need me to explain why, but for those of you who may have missed this, Primark is or was, I’m not sure, selling a Chip mug but a cartoon version. However, I don’t think they expected it to explode in popularity as much as it did. Social media users across the country appeared to flock towards this mug and for any company, this would usually be the ideal situation. Yet, it seems Primark didn’t order enough stock to accommodate the high demand.

Now, as a Disney fan, I really was looking forward to getting my hands on this mug. Really, it was such a simple idea and the perfect merchandise in the lead up to the biggest film release of 2017 so far. We’d all been waiting in anticipation for this film for such a long time so it only made sense that fans were looking for cool things to get their hands on in relation to the movie. The mug was an instant hit on Instagram and I can’t count the number of times my friends screenshotted it to me, all with the same levels of excitement.

But it soon became apparent that Primark did not have enough stock to cater for the amount of buzz it generated, with many fans quickly complaining that they couldn’t find a Chip anywhere. As both a marketer and a blogger, I realise that this was a complete no-no for the brand. The hype around Beauty and the Beast was the perfect occasion in which to sell a lot of stock, drive more footfall into store and overall create some happy customers.

Yet instead, many customers were complaining that the very little stock that did come into store was quickly snapped up by their staff. I don’t know about everyone else but this made me a super unhappy customer, especially and I’d been going into store looking for the mug for several weeks only to be told that it had sold out in ten minutes on the day when stock did arrive. But I know I wasn’t the only one who did this. The situation was made worse by the fact that the individuals who did get the chance to purchase the mugs were quickly putting them up for sale on eBay in the hope of making a profit. 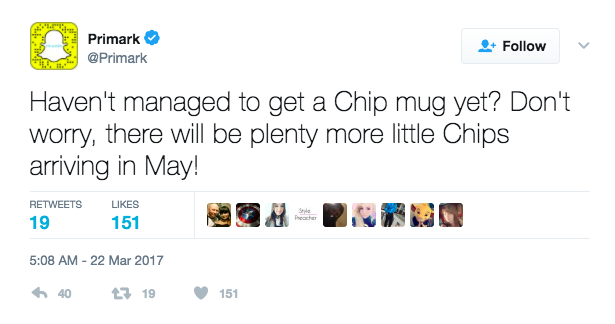 What made me even more disappointed was the announcement that Primark are not due to receive anymore stock until MAY. By that time, Beauty and the Beast will have left cinemas and the excitement around the movie will have calmed down altogether. And speaking for myself, I’m not sure how likely I am to go back into store searching for a product so far down the line. I know as a consumer I can be a little fickle and don’t get me wrong, I’d really love to have a Chip mug in my life but I can’t handle the consistent disappoint of going into store to find out that they don’t have the stock. I think that by not meeting the supply and demand, Primark has really missed a trick with this one.

← It’s time to get organised
A day at Cadbury World →