Ever since I first visited Society Standard a few weeks ago, I have been absolutely obsessed with the place and have been recommending it to all of my friends which is a pretty big deal for me. Based on Whitchurch Rd in Cardiff, it’s an independent bar and kitchen which covers brunch, lunch and dinner and of course, drinks. It was so great to find a restaurant that serves a variety of different food without making you feel like you’re going to be saying sorry to your debit card later. So when they announced their new seasonal menu for winter, I knew I had a dinner date to make. As always, my boyfriend tagged along to help me try out the food. 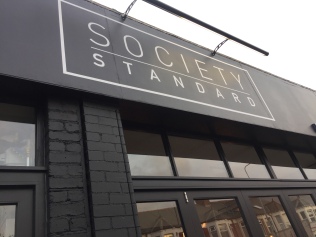 Before we sat down and decided what we wanted as our main course, we decided to order the plate of warm breads with salted olive butter, olive oil & balsamic vinegar. This was such a simple start to our meal but it was actually so delicious and had me reminiscing about the crazy amount of bread and olive oil I ate whilst I was in Lake Garda. For some of that ‘picky’ food to have before your real food arrives, this one is an absolute winner.

Anyway, the winter menu has incorporated some customer favourites that were featured on the menu last time, but one section in particular that has changed is the ‘Seasonal’ section which is used to showcase ‘some of this season’s best produce’. There are also changes to the sandwich section and one of which my boyfriend decided to order.

As always, he decided to order one of the biggest things on the menu which on this occasion happened to be the Mactorious P.I.G sandwich. So in total this was: pulled pork, a mac n’ cheese fritter topped with a fried egg in a brioche bun. Sound like a lot? Well, it was. As we were sat pretty close to the open kitchen on this particular day, I happened to watch the chefs make my boyfriend’s meal and to put it quite frankly, the layers seemed to go on for days. However, I will admit that it did look fantastic and at £8.95, this was quite a bargain meal even if it was a pretty unhealthy option. And he really seemed to enjoy his food, even if his eyes were bigger than his belly and he couldn’t finish it all.

I on the other hand went for a meal that wasn’t loaded with meat or dairy. I decided to try the vegan/vegetarian dish from the ‘Seasonal’ menu which was a Smokey Black Bean Chilli. This dish was featured on the menu as a black bean chilli served with avocado, fried corn tortilla chips, sour cream and chipotle crushed sweet potato. Unfortunately, on the day that we went they had run out of avocado. Although the staff did warn me of this and gave me the offer of trying something else, I decided to go ahead and order the dish anyway as I thought it would still taste delicious.

However, I was slightly wrong in making this decision. I think the dish was clearly missing the avocado flavouring as without it, in my opinion there wasn’t enough variance in the taste so it ended up tasting a little bit plain. I was actually pretty disappointed in the end result and wish I had ordered something else but hey, it was my own fault and you live and learn. So if they’re out of avocado when you visit, I probably would suggest ordering something else from the menu. 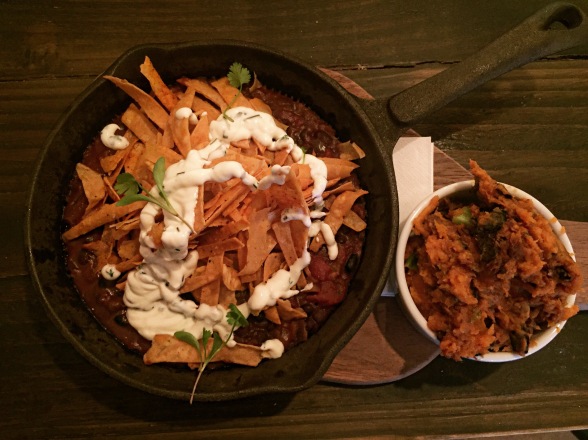