The travel bug is biting me hard again this year and at the end of June, I was lucky enough to jet off to Vienna, Austria, with my boyfriend. I was already excited enough about this trip but what made this even more special was that I got to spend my birthday in this truly beautiful city. Let me fill you in on Vienna.

Okay so first of all, the whole city just reminded me of some sort of Disney movie paradise. This was mainly because all the buildings were beautifully crafted and everything looked so picturesque. To say the city is Instagram worthy is an understatement.

On the first day, we visited the Hofburg palace, which isn’t as much of a palace as you might assume. It’s a collection of buildings which make up the palace quarters and even includes the National History Museum. And of course, right opposite the entrance to the quarters was a Starbucks. Obviously I’m not complaining because you know, good coffee and free wi-fi but guys, they are seriously EVERYWHERE. 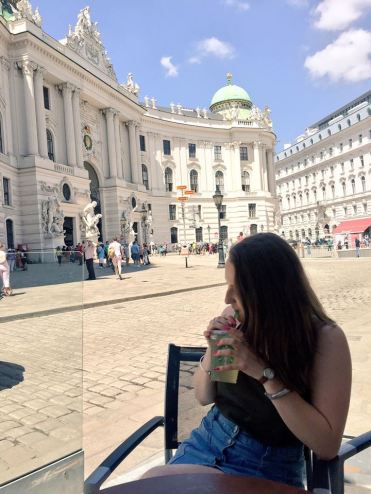 One of my favourite places that we visited was the Belvedere Palace. If you ever visit Vienna, don’t skimp out and not do this attraction. Go, it’s worth it. The Belvedere has two palaces, the upper and lower. In between these two buildings is a garden spread across three levels with beautiful fountains. This was a privately commissioned palace in Vienna and was regarded as a summer residence. Not too shabby for a summer home, right? 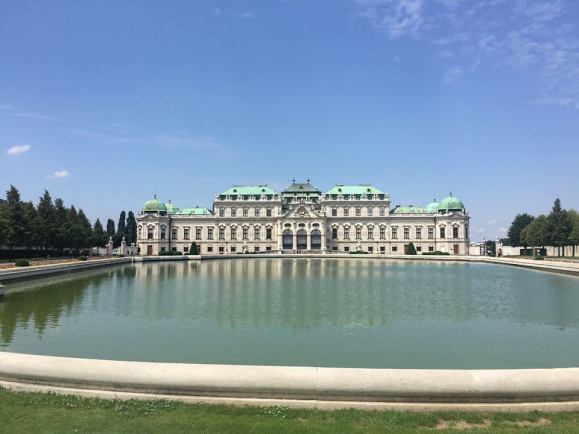 One of my biggest achievements for the trip was my 400 step walk up to the top of the Stephansplatz cathedral. Honestly, walking to the top of a cathedral tower makes you realise how unfit you really are (even if you have been running more miles in prep for this holiday). It was a challenge, I will say that at the least but the view made it worth it. Ahh the view was incredible and I would do it all again just to see that cityscape.

One of the other major attractions of the city was the Schönbrunn Palace, which is the former Imperial summer residence. When I visited the Belvedere palace I thought this was quite incredible, but Schönbrunn was just something else entirely. Not only was it a beautiful palace full of gardens, foundations and cafes, but Schönbrunn holds the oldest zoo in the world and even features a maze in their gardens! I did not spend as much time here as I would have liked to and it’s a tube journey from the main city centre, but go. Honestly, it will pretty much take your breath away. The photo doesn’t even do it justice.

All of this walking around just made me seriously hungry. I ate countless amounts of schnitzels and apple strudels during our visit, searching for the best in the city although I’m sad to admit, I don’t think I reached that goal. I’m not even sorry for all the treats I consumed – when in Vienna and all that.

Since I was turning 22 in this beautiful city, my boyfriend arranged for us to have dinner in the oldest areas of the city in a beautiful restaurant. We were sat right opposite the Rathausplatz park which at night is lit up and is extremely popular, especially with tourists for evening strolls and picturesque scenes. Unfortunately, this area was turned into a fan zone for the Euros during our visit but you know, it still looked amazing anyways, even if I didn’t get the photo I had hoped for.

We did manage to visit some other places in the city, but it’s WAY too much to include in this blog. If you can visit Vienna at some point, please do. It’s a wonderful city full of so much art, culture, good food and is generally just a very pleasant city. If you’re looking for somewhere to stay, we stayed at the Simm’s Hotel which was a little out of the city centre but it was next door to the tube station so it wasn’t a hassle at all and the tube was pretty cheap – just don’t forget to validate your ticket if you want to avoid a fine. The staff were great, the breakfast was a buffet, the room was super comfy, what more could you want?

← Making friends with Lush Bouncy Bunny
How many miles should I be running to lose fat? →

Beautiful evening walk around Roath Lake to truly kill off the #BlueMonday vibes 🌅
Sunday like a Friday ✨
Spent the day walking from our new home to our old one. Super lush to actually see the sun and spend some time outdoors 🌞 🌊
Second weekend in a row that I’ve come to @thedanishbakery for brunch and I have no regrets ☀️☕️ 🇩🇰
✨Reminiscing about our travels choosing pictures to put up in our home ✨ . Copenhagen will always be one of my favourites 🇩🇰
Happiness level 100 now we have a @thedanishbakery in #Penarth 😍 ☕️