While I was in Belgium, I was determined that I would stop off in Bruges, even if it was only for the day. I’ve heard so many wonderful things about the city and after searching through Google images, I decided that it looked beautiful so it was definitely on my to-do list. Now, we only managed a day trip to the city so obviously, I didn’t get to see the full magic of the city. But what I did get to see was enough to make me very glad that I took the time to venture here. 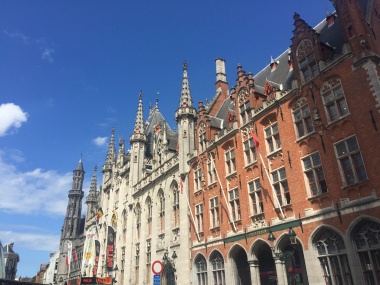 Bruges has been described by many as the ‘Venice of the North’. From our guide, I learnt that this was due to the amount of trade the city gained through their canals many years ago. But even though the canals are no longer open for trade, the overall feel of the city did take me back a little bit to my trip to Venice, especially as we managed to book a boat tour of the canal. This was obviously one of my favourite parts of the trip as we got to see such a large part of the city in a very relaxed manner. And look at how beautiful it all looked!

Despite being another Belgium city, Bruges felt very different to Brussels. It almost didn’t seem as busy and felt to be a much more relaxed city vibe; a place that would be a much more chilled out city break with beautiful scenery and some good, hearty good. As we were taking our tour, we saw horse-drawn carriages taking visitors around the city which had a more ‘old town’ feel.

We also managed to stop off in a restaurant in the city which was absolutely amazing and in typical Belgian style, we ordered ourselves large beers to go with our Beef Bourguignon. But instead of the red wine sauce, the Belgians use beer. Just thinking about that meal makes me drool.

I would love to visit Bruges for a longer break. Who knows, maybe I’ll go back someday. But I’ll keep you posted on my next adventure..