So, I’ve mentioned this little gem in my recent post, MAKE-UP OF THE DAY #FOTD , but I’ve never really written a review for it and I think it deserves one now. A lot of people have recently been blogging about the new Benefit They’re Real! Push Up liner and have been raving about how good it is. But after trying this product, I really don’t think it’s worth the hype and you can read about this from one of my favourite bloggers Emily Burrows.

I first bought Benefit Magic Ink eyeliner a few years ago now after visiting the Benefit counter. I’ve not really strayed from it since I first purchased it because I haven’t found anything thats impressed me enough. I recently bought the Smashbox Limitless Liquid Eyeliner and I wasn’t impressed at all. You had to put a lot of pressure on the pen to get the eyeliner to come out which made it very difficult to draw a straight, neat line but it also left gaps in the line. I found when I tried to correct this, it ended up rubbing away the eyeliner I’d already applied. NEVER AGAIN WILL I BUY THIS.

So obviously, I just carried on using my trusty Magic Ink. I like this eyeliner so much. It is a small brush eyeliner which makes the product so easy to apply. A few of the reviews I’ve read complains that the bristles end up all over the place after a few uses but I haven’t found that to be the case. In fact, I have this eyeliner for months on end and not once has this happened to me yet. I think as long as you are careful with the product, it will stay neat and tidy. It is a little bit sharper than other brushes of its’ kind, but I think that’s what makes it so easy to use. It’s also great for drawing flicks which I’ve been trying to practice more lately (I’d like to say with some success). 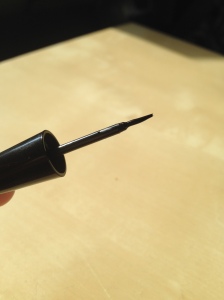 It’s not matte like They’re Real! and it has a more glossy look to it but not in a bad way! It lasts all day and seems to be completely smudge proof which I love. It’s such a long lasting eyeliner and will look exactly the same at the end of the day as it did when I first applied it at about 9am. In my opinion, this eyeliner is so worth the money at £15.50 and I’d recommend it over They’re Real! Push Up Liner any day!