Okay, so today I thought I would write about my recent trip to the Harry Potter studios in London. My brother paid for it as a Christmas present for me and I honestly don’t think I could have asked for a better present. The best way to describe it is incredible. I am a big Harry Potter fan. I love the films and have read all of the books several times and I think J.K Rowling is a creative genius. So I guess this tour was just the icing on top of the cake for me.

To start with, the foyer of the studio is massive with pictures of all the characters on every wall. Now, obviously because I went in December, there was a gigantic Christmas tree in the middle of the foyer which rivalled the tree featured in the films. It was such an amazing thing to walk into and see straightaway. As soon as I walked in I just felt overwhelmed by how big these studios actually were and I was as excited as some of the younger children who were there. Honestly, I think I looked more childish than they did. 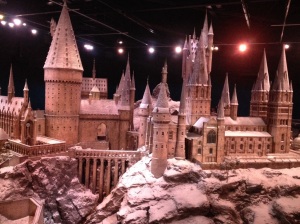 Then we were moved into a cinema within the studios which showed the main characters talking about their experience in these studios. The best thing about this was that the clip ended with the characters walking into the great hall and as soon as that finished, the screen rolled up to reveal the real life entrance to the great hall. It was so crazy to see how much detail was put into something so simple as a door.

The same amount of detail was seen all throughout the tour with every single prop. The most impressive part of this was that there were hundreds of little props and when watching the films, you do tend to take these objects for granted but they really do seem to create a whole world of Harry Potter and make everything seem as though it really could be real. My favourite items, personally, were the horcruxes, especially Rowena Ravenclaws Diadem.

I also couldn’t have expressed how amazed I was by the fact that within the studios, there was a whole street of Diagon Alley. You could actually walk along the street and look into the individual shop windows. Although you couldn’t actually go into these shops, the windows were decorated with all of the things you would hope to see from places such as the Owl Emporium etc.

However, further along the tour, the one place you could walk into was Olivanders. I think any Potter fan would have been ecstatic by this fact (just as I was). Each of the wand boxes were labelled with the names of people involved with the Harry Potter films, an extra detail which just seemed to make all of the difference. My favourite find was a wand box dedicated to J.K Rowling herself. Earlier on in the tour we got to see quite a few of the wands from individual characters and it’s interesting to see that some of the wands seem to match the characters personalities, something that is described within the film but something that we don’t get to see in as much detail as you do behind the scenes in the studio.

I think that the most detail that I saw throughout the tour, was the detail put into the sculpting of Hogwarts castle itself. It was hard to imagine that someone had spent all of this time creating this castle from design and by hand. It did disappoint me though that Hogwarts wasn’t real but I think that’s the child in me talking.

The tour ended in the gift shop which had so many items that you could see in the films and pretty much any gift that you would want to buy (except an iPhone case, which made me sad). They even had a sweet shop section which sold items such as Bertie’s every flavour beans and Chocolate Frogs. So delicious.

Obviously, I don’t think it would be possible to include absolutely everything from the tour because there were so many things to look at. But I did take loads of photos so I thought it’d be nicer to look at some of the photos from the tour especially if reading this has made you want to go. To be honest, I would recommend this tour to anyone. It impressed me so much and probably made me an even bigger fan of the Harry Potter franchise.

To have a look at the tour website, have a click on the link below and I hope you enjoy some of the pictures below that I took whilst on the tour. 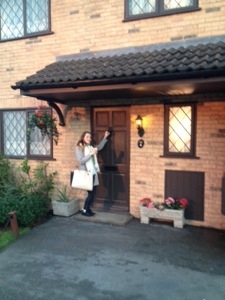 ← The Five Best Dry Skin Solutions
The Help: The Book →